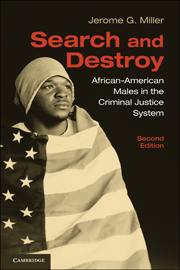 Search and Destroy
African-American Males in the Criminal Justice System