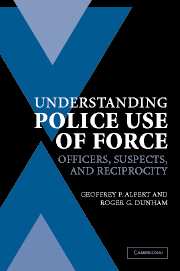 Understanding Police Use of Force
Officers, Suspects, and Reciprocity