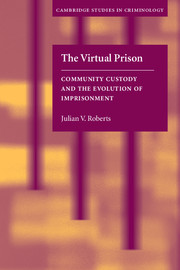 The Virtual Prison
Community Custody and the Evolution of Imprisonment