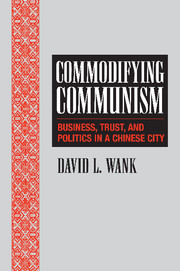 Commodifying Communism
Business, Trust, and Politics in a Chinese City