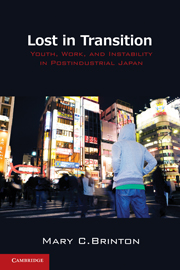 Lost in Transition
Youth, Work, and Instability in Postindustrial Japan