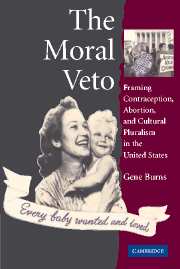 The Moral Veto
Framing Contraception, Abortion, and Cultural Pluralism in the United States