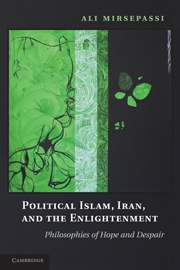 Political Islam, Iran, and the Enlightenment
Philosophies of Hope and Despair