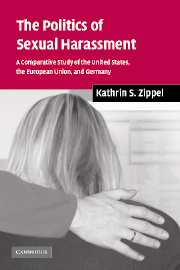 The Politics of Sexual Harassment
A Comparative Study of the United States, the European Union, and Germany