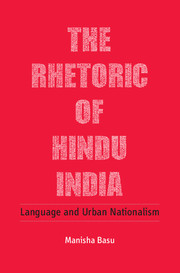 The Rhetoric of Hindu India
Language and Urban Nationalism