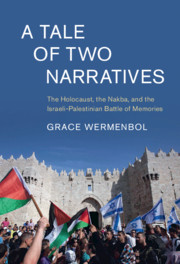 A Tale of Two Narratives
The Holocaust, the Nakba, and the Israeli-Palestinian Battle of Memories