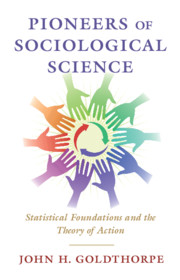 Pioneers of Sociological Science
Statistical Foundations and the Theory of Action