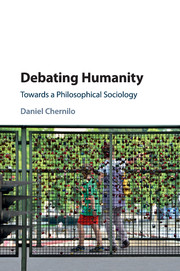 Debating Humanity
Towards a Philosophical Sociology