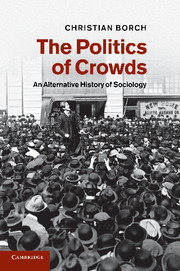 The Politics of Crowds
An Alternative History of Sociology