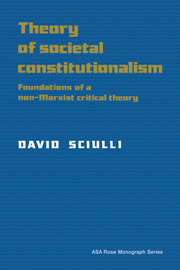 Theory of Societal Constitutionalism
Foundations of a Non-Marxist Critical Theory