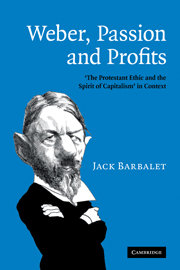 Weber, Passion and Profits
'The Protestant Ethic and the Spirit of Capitalism' in Context