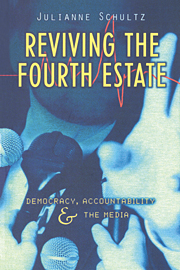 Reviving the Fourth Estate
Democracy, Accountability and the Media