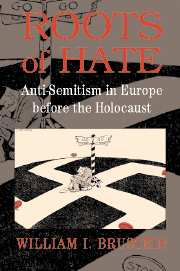 Roots of Hate
Anti-Semitism in Europe before the Holocaust