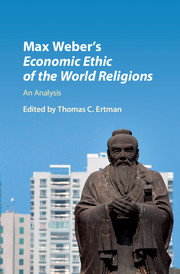 Max Weber's Economic Ethic of the World Religions
An Analysis