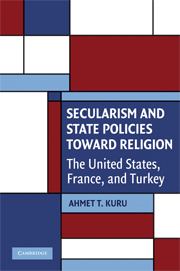 Secularism and State Policies toward Religion
The United States, France, and Turkey