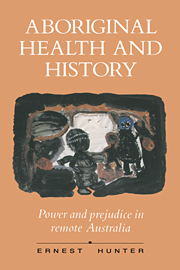 Aboriginal Health and History
Power and Prejudice in Remote Australia