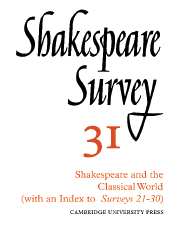 Volume 31. Shakespeare and the Classical World; an Index to Surveys 21-30