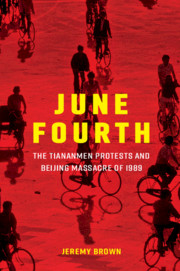 June Fourth
The Tiananmen Protests and Beijing Massacre of 1989