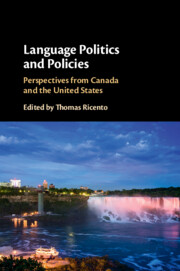 Language Politics and Policies
Perspectives from Canada and the United States