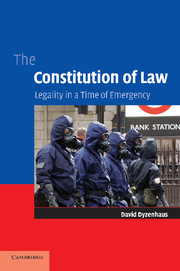 The Constitution of Law
Legality in a Time of Emergency