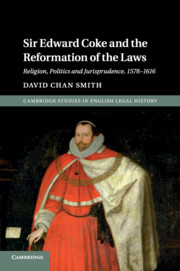 Sir Edward Coke and the Reformation of the Laws
Religion, Politics and Jurisprudence, 1578–1616