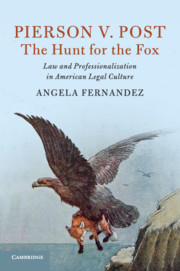 Pierson v. Post, The Hunt for the Fox
Law and Professionalization in American Legal Culture