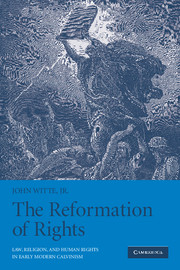 The Reformation of Rights
Law, Religion and Human Rights in Early Modern Calvinism