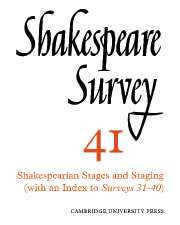 Volume 41. Shakespearian Stages and Staging (with a General Index to Volumes 31-40)