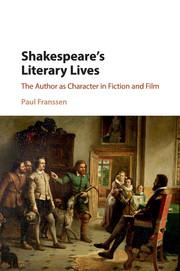 Shakespeare's Literary Lives
The Author as Character in Fiction and Film