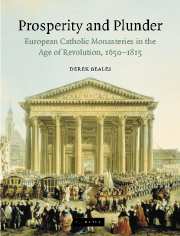 Prosperity and Plunder
European Catholic Monasteries in the Age of Revolution, 1650–1815