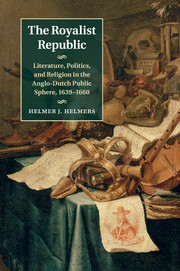 The Royalist Republic
Literature, Politics, and Religion in the Anglo-Dutch Public Sphere, 1639–1660