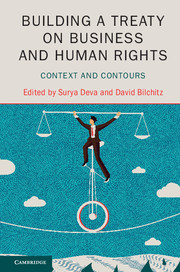 Building a Treaty on Business and Human Rights
Context and Contours