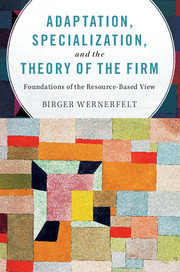 Adaptation, Specialization, and the Theory of the Firm
Foundations of the Resource-Based View