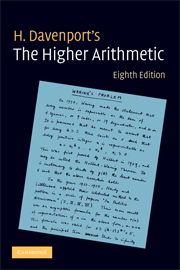 The Higher Arithmetic
An Introduction to the Theory of Numbers