Home
A History of the Jewish War

A History of the Jewish War 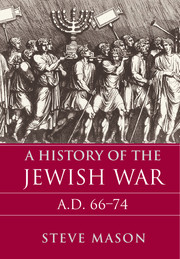 A conflict that erupted between Roman legions and some Judaeans in late AD 66 had an incalculable impact on Rome's physical appearance and imperial governance; on ancient Jews bereft of their mother-city and temple; and on early Christian fortunes. Historical scholarship and cinema alike tend to see the conflict as the culmination of long Jewish resistance to Roman oppression. In this volume, Steven Mason re-examines the war in all relevant contexts (such as the Parthian dimension, and Judaea's place in Roman Syria) and phases, from the Hasmoneans to the fall of Masada. Mason approaches each topic as a historical investigation, clarifying problems that need to be solved, understanding the available evidence, and considering scenarios that might explain the evidence. The simplest reconstructions make the conflict more humanly intelligible while casting doubt on received knowledge.

'No study of the Jewish-Roman war approaches this one in level of sophistication, thoroughness, sweep of erudition, provocative ideas, and originality.'

'This is an engagingly written, well-researched, well-argued, highly original, and provocative book. Steve Mason, by relentless examination of his literary and material evidence in essence turns upside down pretty much all received notions of ‘what really happened’ in the Jewish-Roman War prosecuted by Nero and then the Flavians. And as such he forces the reader to rethink the whole received historical narrative of Roman-era Judaea, the destruction of Jerusalem, and its much-studied aftermath.'

'In A History of the Jewish War Steve Mason has produced, on the basis of his magisterial familiarity with the writings of Josephus and other contemporary sources, the Roman world, the nature of war and the historiography of war, and modern scholarly literature, and with an insistence upon the distinction between understanding sources and reconstructing human events, a highly readable and innovative history of an axial event of the first century.'

'Steve Mason's many perceptive arguments may or may not lead us to a new understanding of the reasons why so many Jews took up arms against Rome in 66. But his book provides a new starting point in the search for better answers to questions about a war that is not - and may never be - over.'

'Massively researched and carefully argued, this wonderfully well-written study offers a veritable clinic in historiography, skillfully synthesizing discussions ranging from archeology and numismatics to chronology to political science and military theory. The text brims with the authority of an expert at the height of his powers and the result is not disappointing.'

'Mason’s book is a striking achievement - erudite, wide-ranging in its reference and original in its conclusions. Anyone who thought that they understood the first Jewish revolt and its causes will, after reading this book, have to be prepared to return to what they thought was familiar and think again.'