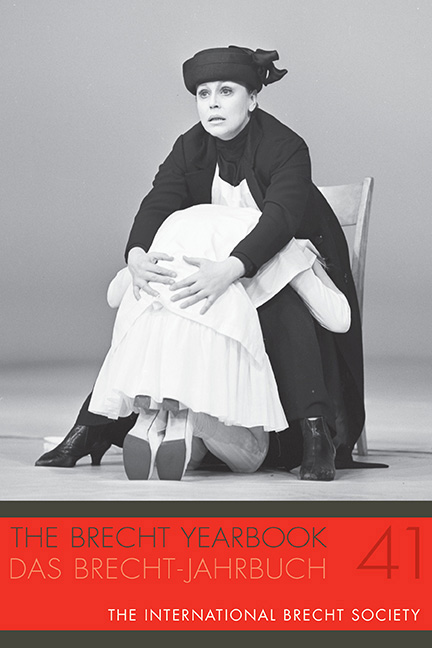 Staging Brecht at Carleton: Students as Actors at a Liberal Arts College

Julie Klassen
Affiliation:
emerita professor of German at Carleton College, where she taught German language and literature and environmental studies.
Ruth Weiner
Affiliation:
Class of 1944 Professor of Theater and the Liberal Arts emerita at Carleton College, where she taught and directed, and where, with a colleague in dance, she established a new Department of Theater and Dance in 2004.

During their teaching careers at Carleton College, Ruth Weiner, professor in the Department of Theater and Dance, and Julie Klassen, professor of German, engaged with Brecht's plays and legacy in various ways. Weiner directed English-language productions of Brecht, including The Caucasian Chalk Circle, The Resistible Rise of Arturo Ui, and Man Is Man. Klassen directed two German-language student productions: Der Jasager / Der Neinsager and Der kaukasische Kreidekreis. In 1998, Weiner and Klassen organized a campus-wide Brecht symposium to celebrate Brecht's hundredth birthday and the fiftieth anniversary of the world premiere of The Caucasian Chalk Circle at Carleton. In 2006, Weiner invited guest director Edward Berkeley to Carleton to mount a main stage production of the musical Happy End, for which she made the arrangements, and Klassen was asked to be dramaturg. Together they conducted postproduction interviews with members of the cast and the production staff.

This examination considers what effects production conditions had for staging Brecht with students in three of these plays: Der Jasager / Der Neinsager, Der kaukasische Kreidekreis, and Happy End. Some of the parameters included the language of the performance, the size and composition of the potential acting pool, the amount of time and production resources available, and the performance venue. The goals of the respective performance influenced each director's decisions regarding the amount of conscious attention to direct to such theoretical concepts as Verfremdung, Gestus, and epic theater. The results indicate that the effective embodiment of these concepts in actual dramaturgical practices proved more important for approaching Brecht's stagecraft than conscious engagement with his theories. Each production foregrounded Brecht's commitment as dramatist to create a universe where human agency could question and defy social and political realities. Each expanded the experiences of actors and audiences alike with an important era of German language and culture.

From the Classroom to the Stage: Two German-Language Productions

In contrast to the scheduled productions typical for a theater department, Klassen's staging of two German-language plays did not originate as college- wide productions or as separate projects; they came about from her midcourse decision to have students perform the Brecht text they were reading. She plunged into each of these projects aware of the limitations on availability of German-speaking student actors, preparation time, and staging resources. Yet the opportunity to explore the written texts as drama outweighed the difficulties of mounting the productions.