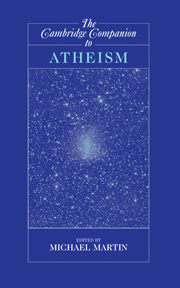 from Part II - The Case against Theism

Among the most telling atheistic arguments are those to the effect that the existence of any being that meets standard divine specifications is impossible - that there not only is not but could not be any such being.

All such arguments depend crucially on sets of divine specifications. A core traditional notion of God is one that specifies him as necessarily existent, omniscient, omnipotent, and morally perfect. God is also standardly conceived of as being a free creator, and is often spoken of as immutable or transcendent. Some impossibility arguments attack a single attribute - attempting to show that the notion of omniscience is logically incoherent on its own, for example. Others attack combinations of attributes - arguing that it is not logically possible for a being to be omniscient and a free creator, for example. If either form of argument succeeds, we will be able to show that there can be no God as traditionally conceived.

Because the arguments at issue operate in terms of a set of more or less clear specifications, of course, it is always possible for a defender of theism to deflect the argument by claiming that the God shown impossible is not his God. If he ends up defending a God that is perhaps knowledgeable but not omniscient he may escape some arguments, but at the cost of a peculiarly ignorant God. The same would hold for a God that is perhaps powerful but is conceded to be less than omnipotent, or historically important but not literally a creator. If the term ”God ” is treated as infinitely redefinable, of course, no set of impossibility arguments will force the theist to give up a claim that “God ” in some sense exists. The impossibility arguments may nonetheless succeed in their main thrust in that the “God ” so saved may look increasingly less worthy of the honorific title.