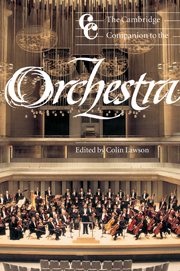 Conservatoire training for orchestral musicians has changed dramatically during the past fifteen years. This change has been reflected in a much more intensive and detailed curriculum, particularly at postgraduate level, designed to produce students who are fully prepared for the various demands of a rapidly changing profession.

When I attended the Guildhall School of Music and Drama in London as a postgraduate student on the ‘orchestral training’ course, there was comparatively little on offer by way of officially organised training. The principal study lesson was the main focus, lasting an hour a week. As my teacher, Peter Lloyd, was principal flute with the LSO, I naturally learned a great deal about orchestral playing as well as attending LSO rehearsals at his invitation. As far as the syllabus was concerned, however, there was no official requirement to learn orchestral repertory and no formal assessment. Apart from my flute lessons, I played in the Symphony Orchestra three times during the year: Berlioz Symphonie fantastique, Sibelius Symphony No. 2 and the concerto competition finals as well as accompanying the opera. For the rest of my time, I was free to practise and to use this relative freedom to make music with my fellow students. At the end of the course I left, the proud recipient of a ‘Certificate of Advanced Studies’ in ‘orchestral training’, and I still look back at the year as having been pivotal in my development, in spite of – or perhaps because of – the lack of institutional rigour. Such courses were typical of all music colleges in the UK at the time. Students were left to pick up certain skills by osmosis, and their readiness for entering the profession was, to a very large degree, dependent on the work done with the principal study professor. In that respect, I was simply lucky.