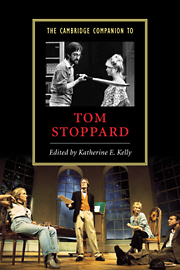 Tomá Straüssler (Tomik to his parents) arrived in India as a four-year-old Czech refugee in 1942; but in early 1946 the eight-year-old who left India as Tommy Straüssler would become Tom Stoppard. By then he had a new father, British Army Major Kenneth Stoppard, whom his mother had married after her husband had died in Singapore following the Japanese invasion. He had a new language, English, which he had learned at Mount Hermon, a Darjeeling school run by American Methodists. He had a new nationality - neither American nor Indian nor Czech but British. He had a new identity in a land where he and his brother would be “starting over as English schoolboys.” And he had a new name. Three weeks after arriving in England, the Straüssler brothers received, from their stepfather, the surname Stoppard.

After Rosencrantz and Guildenstern Are Dead opened to acclaim – and a welter of interpretations – both in London and on Broadway, its 29-year-old author would jokingly refer to himself as “a bounced Czech” and dismiss his biographical background as irrelevant to his play about Elizabethan courtiers. But to describe what it felt like to have his play examined for hidden meanings, the Czech émigré who had arrived from Singapore to attend an American school in India before relocating with a new name to Derbyshire significantly invoked the metaphor of going through customs. When a customs officer ransacks Rosencrantz and “comes up with all manner of exotic contraband like truth and illusion, the nature of identity, what I feel about life and death,” Stoppard confesses, “I have to admit the stuff is there but I can’t for the life of me remember packing it.”