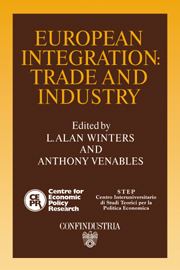 5 - Competition and imports in the European market

The completion of the European Community's (EC) internal market, by removing the barriers still affecting intra-EC trade, is expected to strengthen European competition. Theoretical and empirical research indeed suggest that import competition within European markets imposes a major constraint on domestic firms' price–cost margins. According to the European Commission's assessment of the economic effects of the 1992 liberalisation programme (Emerson et al., 1988), import competition should result in significant welfare gains.

The removal of intra-EC trade barriers is also likely, however, to generate merger activities within the Community. And although concentration of European industries may prompt greater efficiency and raise social welfare, it may also create or foster dominant positions that lower overall welfare. The completion of the internal market may, therefore, require the strengthening of European competition policy in order to ensure a lowering of domestic prices (see Jacquemin, 1990, for an analysis of mergers and competition policy in the EC). But lowering trade barriers against imports from the rest of the world could be as powerful a tool for promoting competition in the EC, or at least play an essential complementary role. Indeed, there are various arguments suggesting that the trade discipline effect of extra-EC imports on European market performance could be stronger than that of intra-EC imports. A further opening of the EC to world imports could then lead to an even stronger competitive impact on EC industrial price–cost margins than expected from the 1992 programme alone (see Sapir, 1989, for a discussion of the external impact of 1992 and the possible links between internal and external trade liberalisation).