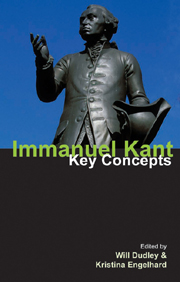 By
Paul Guyer
Edited by
Will Dudley
Show author details

Autonomy and freedom of the will

The concept of freedom is the central normative and metaphysical concept in Kant's philosophy. Freedom of choice and action from constraint by external forces but also even from one's own mere inclinations, something that can be achieved not by the elimination of inclinations, which is not possible for human beings, but by the subjection of inclination to the rule of reason and its demand for universalizability, which Kant ultimately calls “autonomy”, “the property of the will by which it is a law to itself” (G 4:440), is the ultimate value for Kant, the only value that can be an end in itself and has a dignity beyond all price (4:435–6). Freedom of the will, the ability to initiate an action spontaneously, independently of determination by mere laws of nature, so that every human agent has the capacity to act in accordance with the moral law no matter what might seem to be predicted by her entire prior history, is for Kant only a logical possibility in theoretical philosophy but an inescapable postulate of pure practical reason, “the necessary condition of … the complete fulfillment of the moral law” (PracR 5:132). For Kant, the relation between these two concepts, autonomy as our ultimate value and freedom of the will as our ultimate metaphysical property, although one assertible only on practical grounds, is intimate, to say the least – the unconditional moral law that enjoins us above all else to preserve and promote freedom of action “is merely the self-consciousness of a pure practical reason, this being identical with the positive concept of freedom” (5:29) – although his view about what to do with this identity is not stable.