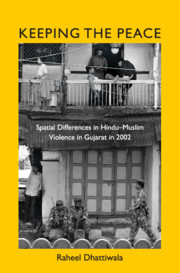 3 - The Political Logic of Violence: Anti-Muslim Pogrom in Gujarat

This chapter begins by formulating testable hypotheses, and then enunciating the methodological procedure for compilation and analysis of data. The implicit political logic of why some places did not witness violence is demonstrated. More specifically, I demonstrate that (a) spatial variation in the violence was not random but strategically organized in those districts and constituencies where the BJP faced the greatest electoral competition in the December 2002 state elections, (b) consequently, the violence enabled victory for the BJP at a time when the party was very likely to have lost.

In January 2001, nearly 14,000 people were killed in a massive earthquake in Gujarat (Times of India, 26 January 2016). The BJP drew widespread criticism for its response to the calamity. This was a turbulent period for the party, for its grip on the state had begun to wane. Candidates had fared poorly in civic and district panchayat elections in 2000. Following the earthquake, the party lost two by-elections in September 2001: one for the State Assembly, and one for the Parliament in Delhi. The chief minister at the time, Keshubhai Patel, resigned, to be replaced by Modi. Under Modi, however, the BJP lost two further Assembly seats in three by-elections in February 2002. In those four by-elections for the State Assembly, its vote fell on an average by 14 percentage points from 1998. A complete revival of the party in Gujarat was vital, particularly for the new chief minister, before the state elections that were scheduled for the end of 2002. Thus, the political logic articulated by Wilkinson was clearly relevant to violence in 2002. Second, several accounts and legal petitions have directly blamed Modi and other elected BJP politicians, particularly those who were cabinet ministers or ministers of state, for fomenting anti-Muslim violence. Kodnani's conviction in 2012 is illustrative. Third, emotionally distressed and angry BJP supporters were likely to have reacted violently towards Muslims.

Based on this, three hypotheses can be laid out:

Hypothesis 1a: Muslims were more likely to be killed where the BJP faced greatest electoral competition.

Hypothesis 1b: Muslims were more likely to be killed where the elected member of the legislative assembly (MLA) was from the BJP.

Hypothesis 1c: Muslims were more likely to be killed where the BJP had the greatest electoral support.