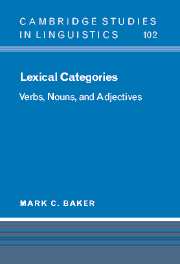 4 - Adjectives as neither nouns nor verbs

The essence of having no essence

In chapter 2, I considered what distinguishes verbs from nouns and adjectives. The difference, I claimed, was that only verbs take a specifier, a syntactic position that is normally assigned a theme or agent theta-role. This is a sharpened version of the widespread intuition that verbs are the prototypical predicates of natural language (see, for example, Croft [1991] and Bhat [1994]). In chapter 3, I turned to nouns, asking what distinguishes them from adjectives and verbs. The answer was that nouns alone have criteria of identity, which allows them to bear referential indices. This is a sharpened and generalized version of the common intuition that nouns are uniquely suited to the task of referring. Now it is time to look more closely at adjectives, not as a foil for the other categories, but in their own right. What distinctive property do adjectives have that underlies their various morphological and syntactic characteristics?

The strongest and most interesting answer to this question would be to say that there is nothing special about adjectives. They are already distinguished from verbs by not licensing a specifier, and from nouns by not having a referential index. Ideally, this should be enough to completely characterize their behavior. Such a theory would preserve an important aspect of the Chomskian insight that one needs only two binary features to distinguish three or four categories (+/−N and +/−V from Chomsky [1970], or +/−Subj and +/−Obj from Jackendoff [1977]). Any additional features would be logically superfluous and would raise questions about why there are not more categories than there are.