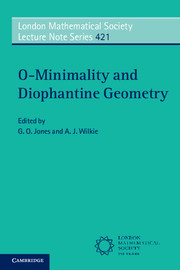 With an eye or two towards applications to Pell's equation and to Daven-port's work on integration of algebraic functions, Umberto Zannier and I have recently characterized torsion points on a fixed algebraic curve in a fixed abelian scheme of dimension bigger than one (when all is defined over the algebraic numbers): there are at most finitely many points provided the natural obstacles are absent. I sketch the proof as well as the applications.

A very simple problem of Manin-Mumford type is: find all roots of unity ƛ, μ with ƛ + μ = 1. Here the solution is easy: we have |ƛ| = |1 − ƛ| = 1 and so in the complex plane ƛ lies on the intersection of two circles; in fact ƛ must be one of the two primitive sixth roots of unity (the picture doesn't work too well in positive characteristic, and indeed any non-zero element of any finite field is already a root of unity, so from now on we stick to zero characteristic). This result has something to do with the multiplicative group Gm, which can be regarded as C*. Actually with and the “line” inside it parametrized by P = (ƛ, 1 − ƛ): we ask just that P is torsion.

Now it is easy to generalize, at least the problem, to other algebraic varieties in other commutative algebraic groups.

are both torsion amounts to asking for torsion points on a certain curve in the surface E2. But here the solution is much more difficult (and it is not clear to me that one can find all ƛ explicitly as above).