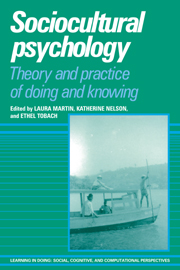 2 - Situated theory as a bridge between psychology, history, and educational practices

The context of theoretical explanation in developmental psychology

The explanations offered in psychology for behavior and experience arise from a cultural activity. The adequacy of a theory's analytic categories is determined partly by the inherent structure of the phenomena we as theorists seek to explain – by the degree to which it succeeds in cutting the objective world “at its joints” (Boyd 1979) – and partly by the perspective that it adopts on a set of human concerns. The perspective originates from a position that is both socially defined and situationally motivated. The purpose for which we are attempting to analyze or to “cut up” the phenomena constitutes the situational motivation, and this in turn can only be understood with reference to the social relations between the author, her subject, and her audience – the context in which this purpose is formulated (Serpell 1990).

The inspiration for this chapter came from two papers by Sylvia Scribner (1976, 1985). The first is a methodological plea for distinguishing between issues of ecological validity and issues of experimental control. The second is an exploration of the role of history in explanations of cognitive development. I believe that the significance of her earlier methodological argument can only be fully appreciated if it is complemented with a sociopolitical insight implicit in her later theoretical analysis.

In the elegant paper “Situating the experiment in cross-cultural research” Scribner (1976) argues that the scientific advantages of experimental control do not carry with them a necessary implication of artificiality and lack of ecological validity. The term situated in the title of that paper carries two distinct but related connotations for me.