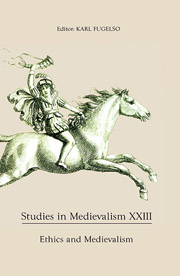 The Dangers of the Search for Authenticity? The Ethics of Hallowe'en

from I - Ethics and Medievalism: Some Perspective(s)

In the last twenty years Hallowe'en has become a major festival in the North American annual calendar, easily outstripping Easter and even the Fourth of July in retail sales and the popular imagination. It involves a lot of masquerading, even more candy and treats, and a joining together of communities. At its core remains a profound fear of death, a recognition that the world is a difficult entity to understand, an acknowledgment that humanity cannot fully comprehend its place in the universe. These are philosophical and ethical questions, and they reflect the paradox at the core of the Hallowe'en festivities: it is a very ancient festival whose purpose is to turn away super-natural or ghostly entities, to re-establish a comprehensible world order. Modern celebrations of this festival search for authenticity in this regard, calling upon tradition and custom to justify some of the excess that pervades the contemporary festival. This effort raises intriguing, possibly difficult, ethical questions for medievalists. Some of the elements of Hallowe'en that are designated as traditional and generally thought to be ancient (in the sense of dating back to the Middle Ages) are misunderstandings of the medieval world, and others call up modes and manners of being that are perhaps best left unrecovered. Three of these elements, chosen more or less at random, are the use of bonfires in videogames, the new science or sport of hurling pumpkins, and the notion of the witch, the female figure at the center of modern celebrations.