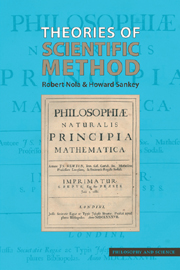 from IV - Popper and his rivals

In this chapter we discuss the methodological views of Thomas Kuhn and Paul Feyerabend, two philosophers of science who have had considerable impact on recent work on methodology. While both Kuhn and Feyerabend have a reputation as anti-methodologists and advocates of epistemological relativism, this is not an entirely accurate assessment of their views. Both oppose the idea that there is some single, invariant and binding method that provides scientists with an “algorithm” of theory-appraisal. Nevertheless, both continue to uphold a role for method in the pursuit of science. In the case of Kuhn we distinguish several phases of development of his account of method; and in the case of Feyerabend we argue that he is not the advocate of “anything goes”, as is commonly thought.

Kuhn's theory of method in The Structure of Scientific Revolutions

Kuhn is best known for his model of scientific theory-change proposed in his influential and controversial book, The Structure of Scientific Revolutions, first published in 1962. This model has been interpreted by some commentators as containing the seeds of an anti-methodological view of science. It has also been widely understood as leading to a relativistic account of science. But, as we shall argue, Kuhn had a sustained interest in the methodology of science, even if his view of the nature of scientific method broke with traditional thinking on the subject. Moreover, despite the evident relativistic leanings of his position, he sought to distance his views from those of the thoroughgoing relativist. At both the levels of methodology and metamethodology, Kuhn continued to revise and develop his views throughout his career.