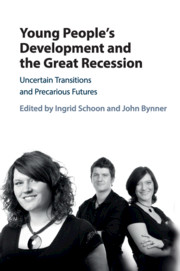 7 - The Vanishing Teenage Worker in the United States

Whereas just twenty years ago holding a part-time job while in full-time education was considered a rite of passage among teenagers in the United States, youth nowadays are much less likely to be employed while attending school. Is the drop in school-year employment among US teenagers, especially in the aftermath of the Great Recession, a cause for concern? In this chapter, we use data from the High School Longitudinal Study of 2009 to assess whether work experiences during the school year adversely affect early educational and socioeconomic outcomes such as test scores, time spent on homework and extracurricular activities, career aspirations, and educational expectations. Results confirm a sharp decline in teenage employment during the school year, as only 46 percent of youth had worked by the spring of the 11th grade. Among working teenagers, those who averaged intensive hours during the school year (i.e., more than twenty hours per week; about 11 percent of youth) had significantly lower test scores and educational expectations compared to their nonworking counterparts. However, youth who worked moderately showed no significant declines in socioeconomic achievement and in fact were more likely to participate in extracurricular activities and spend more time doing homework than their nonworking peers. Furthermore, teens who worked intensively were less likely than nonworking youth to be uncertain about their future career plans. These positive effects of work will be lost if teenage employment in the USA continues to disappear.

Working while in full-time education was once a rite of passage among teenagers in the USA. Previous longitudinal studies of US adolescents coming of age during the 1980s and 1990s (e.g., National Longitudinal Survey of Youth, National Educational Longitudinal Survey, Youth Development Study) revealed that approximately 80 to 90 percent of teenagers worked at some point before the end of secondary school (National Research Council 1998). Today, US teenagers are much less likely to hold paid jobs while attending school than in years past (Staff et al. 2014). In 1992, for instance, according to cohort data from the senior high school-based Monitoring the Future study, approximately 42 percent of 8th and 10th graders and 74 percent of 12th graders held a paid job during the school year.