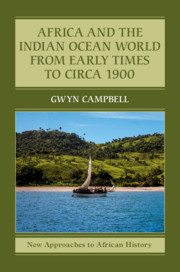 The history of Africa's historical relationship with the rest of the Indian Ocean world is one of a vibrant exchange that included commodities, people, flora and fauna, ideas, technologies and disease. This connection with the rest of the Indian Ocean world, a macro-region running from Eastern Africa, through the Middle East, South and Southeast Asia to East Asia, was also one heavily influenced by environmental factors. In presenting this rich and varied history, Gwyn Campbell argues that human-environment interaction, more than great men, state formation, or imperial expansion, was the central dynamic in the history of the Indian Ocean world (IOW). Environmental factors, notably the monsoon system of winds and currents, helped lay the basis for the emergence of a sophisticated and durable IOW 'global economy' around 1,500 years before the so-called European 'Voyages of Discovery'. Through his focus on human-environment interaction as the dynamic factor underpinning historical developments, Campbell radically challenges Eurocentric paradigms, and lays the foundations for a new interpretation of IOW history.

‘Africa and the Indian Ocean World from Early Times to Circa 1900 is a path-breaking work that integrates Africa into the history of the Indian Ocean world (IOW) in innovative and unusual ways. In its sweep, it offers us one of the most compelling narratives of environmental and social dynamics that underpinned the making of a macro-region and of Africa's dynamic relationship with it. In its methodology, it makes full use of environmental history to define and delineate the articulation of the IOW. Moreover, in its analytical focus, it alters conventional understandings of the history of the IOW, too often seen in terms of South Asian centrality or of European hegemony. The volume effectively interrogates existing modes of periodization, excavates the nitty-gritty of human-environmental interactions in the region and takes a fresh look at phenomena such as slavery and colonisation from a predominantly African perspective.'

‘Campbell succeeds in writing a compelling history of Africa's historical relationship with the Indian Ocean world by placing human-environment interactions centre stage. Without falling into a geodeterministic argument, he vividly illustrates how planetary forces have contributed to the dynamics of an Indian Ocean world global economy. This volume not only shows the limits of prioritizing humans as agents of historical change, it also highlights the potential of going beyond conventional Eurocentric periodization. Hence, this book is of great value for historians and Indian Ocean world scholars, as well as for current conceptual debates on human-nature relations more generally.'

‘This short book serves as a fine introduction to the integration of the Indian Ocean world into Africa's history. Starting before the onset of the Common Era, it extends chronologically to the onset of the modern colonial era in the ‘Scramble for Africa', and geographically as far north as Egypt. Numerous maps, tables, and illustrations are helpful for an understanding of the text. In the Annaliste tradition, Campbell considers that long-term demographic and economic trends were generally more significant than short-term political and military events. He thus rightly places much emphasis on environmental history, in a dialectical interaction with humans occupying the land. Climate, seismicity, and diseases of people and animals take pride of place, with human activity especially influencing climatic change, but also causing famines through military operations. The European periodization of ‘mediaeval' and ‘early modern' is questioned. And, in opposition to Eurocentric historians, the author firmly stresses the agency of indigenous Africans within the region.'

William G. Clarence-Smith - School of Oriental and African Studies, University of London and Chief Editor of the Journal of Global History

‘Even those who are only loosely familiar with the history of Egypt, the 'Swahili coast', the Horn of Africa, and Madagascar will benefit from this densely packed story of the region … illuminating … Highly Recommended.’

‘This is a powerful book made more impactful by its timeliness. It is a historical book that deepens our understanding of the ecological implications of colonialism, while simultaneously supporting new scholarship on extremely important, contemporary issues around social justice, disenfranchised communities, and role played by African peoples in the process of shaping the modern world.’