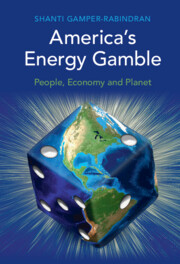 How can America get back to an energy transition that's good for the economy and the environment? That's the question at the heart of this eye-opening and richly informative dissection of the Trump administration's energy policy. The policy was ardently pro-fossil fuel and ferociously anti-regulation, implemented by manipulating science and economic analysis, putting oil and gas insiders at the helm of environmental agencies, and hacking away at democratic norms that once enjoyed bipartisan support. The impacts on the nation's health, economy, and environment were - as this book carefully demonstrates - dire. But the damage can be reversed. Ordinary Americans, civil society groups, environmental professionals, and politicians at every level all have parts to play in making sure the needed energy transition leaves no one behind. This compelling book will appeal to course instructors and students, government and industry officials, activists and journalists, and everyone concerned about the nation's future.

'With America’s Energy Gamble, public policy expert Shanti Gamper-Rabindran lays out a stark case that powerful oil and gas interests have, with considerable help from the outgoing Trump administration, gained control of the lever arms of our energy and environmental policy apparatus. Our economic competitiveness, the health of our environment, and the livability of our planet are all now threatened. Read this book to be informed about the threat and armed with the knowledge of what can be done in the Biden era to undo the damage and right the course.'

‘America's Energy Gamble deserves a wide audience. It makes two important contributions to our understanding of the Trump era. As the first book-length treatment of Trump's aggressive environmental deregulation, it thoroughly exposes the tenuous moorings of that campaign, including its shaky connection to its economic goals. Equally importantly, it reveals the affirmative side of Trump's agenda: not just opposition to business regulation of every kind (though that was a factor), but the vision of fossil fuels as a route to national prosperity.’

Dan Farber - University of California, Berkeley; author of Contested Ground: How to Understand the Limits of Presidential Power

‘The book traces how US decades-long policies to favor oil and gas extraction, while running rough shod over communities in “energy sacrifice zones,” paved the way for the Trump administration’s destructive policies. It highlights how the administration’s anti-science and anti-democratic decision-making perpetuated the grip of the oil and gas industry when economic prudence and human survival demand a transition to renewable energy.’

‘In detailing the actions and consequences of four years of the Trump Administration, Professor Gamper-Rabindran has wisely focused in on one important sector: US oil and gas. Her target audience is both scholars and the informed public, a target she has reached admirably, despite the difficulties in avoiding appearing partisan. Her writing is very readable, well-documented, comprehensive and enlightening.’

‘A critical reflection on the barrage of Trump Administration deregulation in the oil and gas sector at the expense of public and environmental health. She [Gamper-Rabindran] methodically reviews why and how this deregulation occurred alongside the effects of these processes on Americans as efforts are made to transition away from oil and gas, and international initiatives are undertaken to address threats posed by climate change...an incredibly timely read that shows, based on the impacts of Trump-era oil and gas expansion and deregulation, how cynical, self-serving, and dangerous those developments would be for the country’s economy, public health, and climate.'